skip to main | skip to sidebar

Most people in the local Kung Fu community know me for performing Snake Form in tournaments (before I stopped competing) and performances.  People that did not know me in the early days of teaching probably are not aware of why this started.  I know so many amazing forms from Chan Tai San that could have been the form of choice but that is the one that ended up being my signature form.  Here is the quick story behind it.

The year was 1989 and I had been teaching my class for about a year.  We were happy to perform and promote our classes to the public whenever the opportunity arose.  One request that year was for a Kung Fu demo during a Chinese New Year celebration.    Of course we were happy to perform at the celebration.  The follow up request was to see if we would be able to include a Snake Form to celebrate the Year of the Snake.  Sifu had taught me a Snake Form and there was enough time to fine tune it to an acceptable level for performance so I agreed.  The performance went off as planned and I felt very comfortable with the form.

The following weekend there was a tournament that the class decided to attend so I pulled out the Snake Form again because it was the one I was focused on during my most recent training.  I did well in the tournament and with a healthy schedule of other tournaments coming up in the following weeks, I just decided to ride it for the stretch.  That stretch became a year and the next thing I know it became my form of choice.  I did throw in other forms on occasion just for the change but always returned to Snake.

There were a few things that I think caused me to keep using the form:

What Can A Kung Fu Student Do?

Every single student in a class progresses and improves...I guarantee that as long as you go to classes and put in some effort, you will improve.  The more important thing is how to maximize your training.  Each person learns at a different pace so here are some tips to help do your best.

When observing students working on their fighting, I often see students intimidated by level or seniority of the other student that they are going to fight with.  I was also there at one point but quickly learned that there is no reason to worry and eventually preferred to work with people who were more senior and usually better than I was for some good reasons:


I do recommend being more careful in tournament settings as adrenaline seems to contribute to lack of control.  I also believe that tournament fighters care less because they actually don't know you and will not have to see you in the next class.  I am not suggesting that people will try to hurt you but I have seen some things that you would not see in class.

Even with tournaments, I would encourage competitors to forget about the size or level of their opponent and look for ways to penetrate the opponent's defences that are within your own abilities.
Posted by SifuChow at 7:44 PM 1 comment:

Settled Into Our New Location

It has been a few weeks now and we are settled into our new location and training hard again.  For anybody who has not heard, we are now located in Mississauga, Ontario after about 14 years in our last location.  It seems like we are starting to get used to the surroundings and I am looking forward to everybody's continued success in their training.
Posted by SifuChow at 2:18 PM No comments:

Learn A Bit At A Time

Learning Kung Fu is not an exact science.  Each student learns at a different pace and has different levels of natural ability, coordination, learning aptitude, focus and self motivation.  Everybody loves learning new techniques and forms but it is important to remember to take your tome to allow your body and mind to absorb the new material.  It is natural to think that you can absorb more than you were taught but it is best to channel that energy into repetitions of the things you learned in the current and past classes.  It is almost impossible to be correct without repeated execution.  Remember to take as much joy in improving as you do in learning new.  This will greatly increase your overall result over time.
Posted by SifuChow at 6:54 AM No comments:

New Instructor in the School - JP 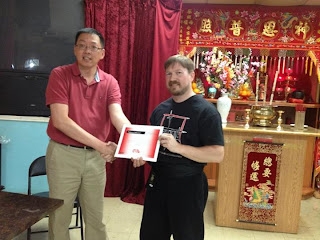 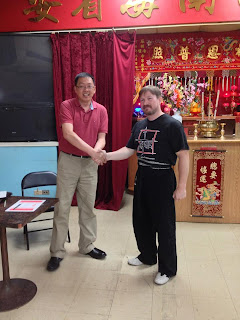 We proudly promoted JP to Instructor level on Thursday night.  Congratulations JP!!  The only question we have is whether or not you wore the new belt to work.
Posted by SifuChow at 8:36 AM 3 comments:

I have been away for quite some time due to work related reasons.  Now that I have a chance to return to do some writing, I took a browse through some past posts and came across this one.  We are all a bit older since I last posted so thought I would link back to it.

Hopefully I will be adding more content again very soon.
Posted by SifuChow at 10:14 AM 3 comments:

Who is your favourite Chinese Kung Fu Actor?